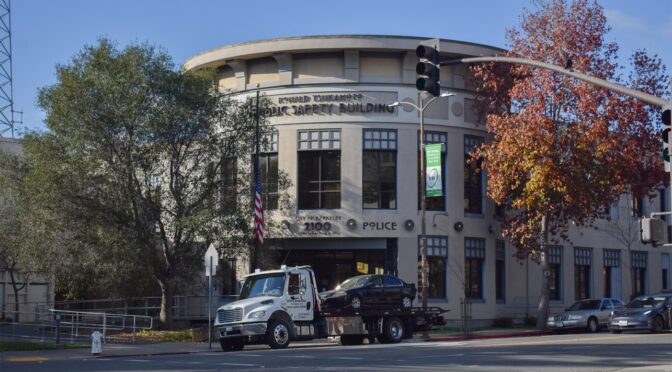 By Lily Button. Originally published in the Daily Cal

The Berkeley Police Accountability Board, or PAB, discussed a successful perpetrator negotiation on Telegraph Avenue and delayed action for a proposal to expand public safety surveillance camera use in Berkeley at its regular meeting Wednesday.

Oakland Privacy representative Tracy Rosenberg advocated against the Automated License Plate Readers policy, which uses cameras to capture vehicle license plates. Expansion of the policy would allow the use of scanning technology beyond parking enforcement, the initial purpose portrayed by City Council.

“This is essentially a breaking of a contract that was made between the City Council and the residents in Berkeley in terms of why this equipment was brought and how it was going to be used,” Rosenberg said during the meeting.

Rosenberg discouraged the board from adding uses to law enforcement equipment due to difficulties in data extraction.

The bulk of the meeting’s debate surrounded policy 351, legislation proposed to use public safety fixed video surveillance cameras in Berkeley.

Currently, Berkeley has surveillance cameras at 10 street intersections, according to PAB member Kitty Calavita. The proposed policy would allow new cameras to be built on “city property,” which excludes streets and sidewalks.

However, Calavita noted that an unusual definition of “city property” within the proposal could lead to abuse of the intended technology. Such misuse includes facial recognition software banned by the city of Berkeley.

“I personally believe it was never meant to be expanded in this manner,” said PAB Vice Chair Nathan Mizell.

Calavita said the PAB needs more time to conduct an adequate revision process before further action. PAB member Izzy Ramsey suggested the formation of a subcommittee to investigate and advise proper use of surveillance cameras.

Furthermore, Calavita emphasized the importance of protecting civil liberties and rights in the board’s decision.

“Clearly for a policy that has profound implications for privacy and liberty we need appropriate vetting,” Calavita said.

Later in the meeting, BPD Sgt. Robert Rittenhouse spoke on behalf of Chief Jennifer Louis to update the PAB on a successful negotiation by officers on the 2500 block of Telegraph Avenue days prior.

BPD received multiple reports of a man allegedly performing stabbing motions with a large kitchen knife in a heavily populated area, according to Rittenhouse. Officers on-site isolated the individual and contacted the mobile crisis team to gather case-specific information for peaceful negotiation.

“It was impressive to see our officers using the escalation techniques and calling for resources to bring the situation under control safely,” Rittenhouse said.

The incident was resolved after 25 minutes with no force ventures, Rittenhouse noted.