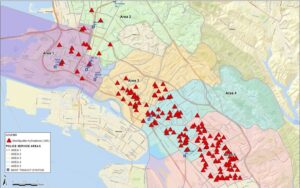 Privacy and criminal justice activists across the country are focusing on gun detection software, and specifically lead vendor, Shotspotter, after the company’s forensic reports threw two innocent men in jail and drew cops into a fatal encounter with 13 year old Adam Toledo in Chicago.

The outdoor microphones, which are predominately deployed in lower income Black and Brown communities, routinely create dangerous situations by sending police alarms of gunfire that never took place. Independent research documents that around 90% of Shotspotter alerts end up with no evidence of gunfire ever having occurred.

Shotspotter has bought a predictive policing company (Hunchlab), promoted their technology’s potential as a drone activation system, and recently announced a partnership with Airobotics, a drone company based in Israel.

We need real solutions to gun violence, not routinely malfunctioning tech that is wildly expensive and drains public dollars.

If you’d like to help our coalition end Shotspotter contracts in the Bay Area and take the message to the company’s doors, watch this space.