From a press release issued by The Media Literacy Project in Albuquerque, NM

Albuquerque citizens along with the staff and board of Quote Unquote Inc. showed up to the station at 519 Central NW to find their access revoked by an armed officer placed there by the City of Albuquerque. Preliminary reports by community members and would-be “movers” gathered on the street outside the station suggest that sometime over the course of last night the City Attorney ordered the locks changed on the building and used taxpayers’ money to station an armed guard there to prevent access. Apparently, the City of Albuquerque became aware of Quote Unquote’s very public and transparent appeal to its 30 year-long base of community supporters for help with moving all real property owned by the nonprofit for use at the new location of the public access television provider. 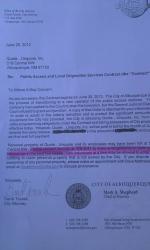 Currently still on the air (Comcast Cable Channel 27 or www.quote-unquote.org) and fulfilling their end of the bargain, Quote Unquote staff, employees and volunteers fully expected to be able to “do their job” this morning when they arrived to a guard with a gun. As you can see in the attached letter by City Attorney David Tourek, Quote Unquote’s contract does not end until June 30th, 2012. Expectant volunteers and outraged community members are now gathering at the station with concerns about the City of Albuquerque’s ability to uphold Quote Unquote’s 30 year legacy of providing working-class citizens with a platform to exercise their right to free speech for the remainder of this month and into the future.

Quote Unquote Executive Director Steve Ranieri is currently attempting to follow City protocol expressed in the City Attorney’s letter and arrange a meeting with City of Albuquerque Media Resources Manager and Request for Proposals ah-hoc committee member Dave Mathews, in order to gain access to the building so that employees and board members can retrieve property that does not belong to the City of Albuquerque.

The City of Albuquerque is the defendant in a forthcoming lawsuit regarding Quote Unquote and a possible investigation into the misappropriation of IPEG funds.