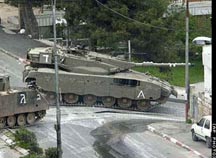 “Yesterday had to be one of the worst days,” begins the email from Dalia, a 21-year-old Palestinian-American journalist, to her friends. “Israelis have gone into all media stations and either taken them over or searched them.”

Dalia works in Ramallah for Al-Jazeera–the popular Qatar-based satellite news channel and one of the few international news media that could continue news coverage in Ramallah during the Israeli-imposed 24-hour curfew that lasted almost a month (March 29-April 24).

When Israeli soldiers entered their building, Al-Jazeera’s director opted to go live, saying: “If we are going to die here, the whole world might as well know about it.”

None of the Al-Jazeera crew was killed, but they remained confined to the building until a German TV crew offered to take them home in a bulletproof jeep. On a silent ride through a Ramallah paved in rubble, they were stopped three times by the Israeli Defense Force.

“Soldiers pointed their guns at us and one came up to the car and asked for our press IDs,” writes Dalia. “I gave him my U.S. passport and he shut up. That passport is my only protection here and I am so thankful for it…”

The fear expressed by Dalia is even greater among native Palestinian journalists who don’t have the security offered by a blue U.S. passport. Without foreign papers or press passes they risk a great deal more to ensure freedom of the press.

For years now, Palestinians in the West Bank and Gaza, including those who work for international news services like the Associated Press and Reuters, have had to obtain special permits to enter Israel or East Jerusalem. Since the recent Israeli offensive, the permits have become especially difficult to get and are for very limited periods of time. The result is severely restricted travel access between the West Bank and Gaza. In response to an email query from me, several Palestinian journalists identified restriction on movement to be their greatest challenge. “It is very clear that the Israeli military is attempting to prevent journalists from covering the situation and writing about what is going on here,” said Adam Hanieh, a Palestinian freelancer and human rights researcher in Ramallah.

The Committee to Protect Journalists (CPJ) reports that many Palestinian journalists have complained of being denied press accreditation–which facilitates passage through checkpoints and grants entry to press conferences and government events–by Israel’s Government Press Office (GPO). At times of heightened security concerns, Israeli authorities completely close off the occupied territories and even Palestinians with permits are denied entry into Israel or East Jerusalem. Roadblocks around every city deny all Palestinians freedom of movement and even prevent delivery of newspapers.

But independent news media is the web that connects Palestinian society and one of few vehicles for the voices of the Palestinian people, so journalists take life-threatening risks. The CPJ cites gunfire as the most dangerous and immediate threat to journalists covering the second intifada. Journalists also regularly face tear gas, shrapnel, and physical assault from militant Jewish settlers and the Israeli Defense Force (IDF).

Hanieh reports that a number of Palestinian journalists have been killed; the CPJ counts only one, but cites over 82 separate incidents of detention, attack, or arest in the period between September 29, 2000 and April 9, 2002. In a plea to Prime Minister Ariel Sharon, CPJ Executive Director Ann Cooper has requested the immediate release of at least five Palestinian journalists still in Israeli custody. “Arresting journalists and barring them from carrying out their professional work constitutes an unacceptable infringement of press freedom,” she writes in her May 3 letter. “We call on Your Excellency’s government to release these unjustly detained journalists immediately and to ensure that the press is able to report the news without further interference from authorities.”

So far, there’s been no response from Sharon’s office.

Beyond the restrictions on movement and the risks of detention and death, much of the Palestinian media has endured a literal sledgehammering of their equipment and resources. The preliminary report from the Palestine Emergency Committee (April 13, 2002) states: “The private media has been subject to extensive and systematic destruction of its technical facilities. The evidence suggests a policy of de-institutionalizing all Palestinian media, not just that of the Palestinian National Authority (PNA) but Palestine’s vibrant independent TV and radio sector, as well.”

Independent Palestinian media reflects a diversity of political thought ranging from the secular pro-democratic left to the radical religious right to the everyday voices of people in the refugee camps. In PNA-controlled areas there are almost 50 TV and radio stations, far more than in Israel or anywhere else in the region. But since the recent Israeli incursion, many of these independent establishments have been suppressed by the IDF. One Palestinian citizen I corresponded with said that over 20 private radio stations went off the air due to the Israeli siege and the consequent loss of equipment. A few are now coming back to life with bare bones programming, he reports.

“The aggression against the media is yet another move against the nascent Palestinian entity,” asserts Lamis Andoni, Palestinian journalist and former UC Berkeley professor. “Israel wants to control the media because it is an expression of the Palestinian identity.”

Daoud Kuttab, esteemed Palestinian journalist and director of the Institute of Modern Media at Al-Quds University in Ramallah, can testify to that. In an Op Ed piece in the April 6 issue of the New York Times, he vividly describes what happened to Al-Quds Educational TV: “On Tuesday [April 2], Israeli soldiers came to the four-story Medical Profession College building, where our studios are located, and began destroying what we have worked to build. Every office in this educational facility was broken into, equipment was destroyed. Our two remaining staff members manning the broadcast were arrested and held for four hours before being released. While being held, they saw television cameras and invaluable video archives thrown from the fourth floor, where our equipment and studio are located.”

Al-Quds was “neither a governmental mouthpiece nor a commercial station that lives by game shows and shampoo,” Kuttab says. Rather, it was a media effort that strove to promote freedom of expression and diverse opinions on social and political issues. “We felt firmly that we were laying the blocks for a cohesive, progressive society that would be the foundation of an independent state,” Kuttab explains. Al-Quds was even involved in a partnership with Israeli educational TV to produce a version of “Sesame Street,” aimed at teaching mutual respect and tolerance to Israeli and Palestinian children.

Despite the rhetoric coming out of Israel asserting its support for a democratic Palestinian state, the Al-Quds incident clearly suggests that Israeli’s actions are working against these democratic institutions.

Al-Quds is not alone.

The destruction of a multitude of other independent TV and radio stations is documented in the Palestine Emergency Committee’s preliminary report. Among them are Al-Nasr TV, Manar radio station, Al-Watan TV, and, ironically, the Love and Peace FM radio station. (For details, see www.jmcc.org/new/02/apr/destruction.)

In an occupied land where 24-hour curfews cage families in their homes, TV tends to take on a new role. Not only is it the primary source of entertainment to most families, it is also the most important source of information about what is happening outside the front door. Imagine, then, the shock of countless besieged families when their regular broadcasting was interrupted by a stream of vivid pornography over several networks, including the Ramallah-based private station, Al-Watan TV.

In The Nation of May 6, Edward Said writes: “Despite Israel’s effort to restrict coverage of its destructive invasion of the West Bank’s Palestinian towns and refugee camps, information and images have seeped through. The internet has provided hundreds of verbal as well as pictorial eyewitness reports, as have Arab and European TV coverage, most of it unavailable or blocked or spun out of existence from the mainstream U.S. media.”

A few weeks before the Israeli invasion of the West Bank, the Independent Media Center (IMC) opened up a website which makes available firsthand reports from families and victims of the Israeli assault to people inside the territories and witnesses outside. (See http://jerusalem.indymedia.org.)

Even extremely marginalized communities within Palestinian societies are finding ways to be heard. For example, the Dheisheh Refugee Camp in Bethlehem is putting together a youth-run grassroots media campaign to bring the voices of young refugees to the international community. There is also an abundance of underground pamphlets that inform the public about events and help them to organize. Palestinian writers, reporters, and revolutionaries are fighting like hell with courage and ingenuity to get the word out. Let’s hope the world is listening.

Cherine Badawi is an Egyptian-American freelance writer, musician, and activist based in Oakland.

ncisco Chronicle to protest distorted coverage of Palestine in the north Bay’s two major dailies. Both demonstrations were organized by a newly formed Network Against Disinformation (NAD). NAD efforts began with a “die in” and protest picket line of a clearly deceptive headline by the Oakland Tribune.

As highlighted on Flashpoints, KPFA 94.1 FM, a banner headline implied that Arafat was the cause of the recent Israeli military terrorism on the Palestinian people, the Palestinian Authority, and the destruction of Jenin. NAD maintains that without the disinformation published in the corporate media, the U.S. government would not be able to maintain its support of Israel and without the support of the U.S. governement, Israel would be much more likely to accept a peace settlement and withdrawal agreement. At the May 15 demonstration, despite expulsion threats from Tribune security, the NAD core group was able to meet with Tribune Editor Mario Dianda for an hour. One result of the meeting was to set a larger editorial meeting two weeks later with Dianda and his supervisor, Nancy Conway, Executive Editor of Alameda Newspaper Group (ANG, the Tribune’s parent corporation) and Mike Oliver, Deputy Regional Editor.

While the ANG representives expressed a willingness to keep dialogue going and to use some of the information resources on Palestine suggested by NAD members, the paper has by no means met the protestors demand for less biased news. NAD specifically proposes that the papers use a broad range of international resources and bylines on the Middle East such as Robert Fisk and others at the London Independent, George Monbiot and others at the Guardian, and Amira Haas and others at Israeli paper, Ha’aretz. The ANG editors declined to make such a committment.

The dialogue process has created a debate within NAD. On the one hand are voices who want to “take what we can get” and continue to dialogue for more openness and less anti-Palestinian bias. On the other hand, are voices unwilling to allow this “dialogue” principle to divert NAD from a campaign of exposure and public protest of media manipulation.

The June 5th protest at the Chronicle has also led to promises of future editorial meetings. NAD is evolving an approach that continues to expand the exposure, protest, and pressure. When possible, NAD will open channels and put media managers in touch with high-quality legitimate expertise they would otherwise ignore. The group plans to then monitor the results. Organizing is ongoing and will involve open meetings, editorial meetings, and demonstrations. The next demonstration at the San Francisco Chronicle is scheduled for July 12, 2002. For more information email anticensorship@onebox.com.

Marc Sapir is a Berkeley based activist and physician.