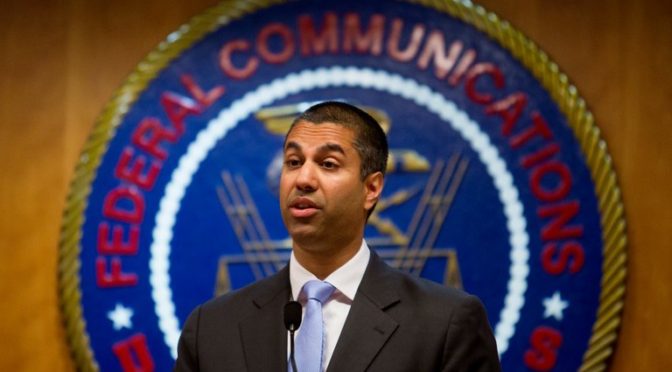 BY AJ DELLINGER  (originally printed in the International Business Times

The United States Federal Communications Commission will vote to roll back media ownership regulations that prohibit organizations from owning a television station and newspaper in the same market and will make it easier to acquire media outlets.

The announcement of the vote was made by Chairman Ajit Pai while he and the other four commissioners were testifying at an oversight hearing before a House Energy and Commerce subcommittee on Communications and Technology.

The announcement caught some of the other commissioners off guard. A source familiar with the matter told the International Business Times that the proposal was first shared with each of the Commissioner’s offices at 2 p.m. EDT—the same time the hearing was scheduled to begin.

A vote on the proposal will take place during the FCC’s November 16 meeting. If approved, the decision would lift restrictions on media ownership that date back to the initial passing of the rules in 1975.

Pai’s proposal would allow companies to own multiple TV and radio stations within a single market and would allow two locations among the top four in a given market to petition the FCC for the right to merge, Reuters reported.

At the time the restrictions were originally implemented, the FCC moved to block cross-ownership of newspapers and broadcast stations operating in the same market in order to ensure a diversity of opinions.

Chairman Pai, who was appointed to his position by President Donald Trump, argued the regulations amounted to little more than federal interference. “If you believe as I do that the federal government has no business intervening in the news, then we must stop the federal government from intervening in the news business,” he said during the hearing.

Chairman Pai also argued that the restrictions are no longer relevant in the current marketplace, citing the growth of digital media and the duopolistic hold on online advertising maintained by tech companies like Facebook and Google.

“Online competition for the collection and distribution of news is greater than ever, and just two internet companies claim 100 percent of recent online advertising growth. Indeed their digital ad revenue this year alone will be greater than the market cap of the entire broadcasting industry,” Pai said.

“I don’t think we have the tools and the data need to make these wholesale changes,” Democratic Commissioner Mignon Clyburn said during the hearing.

Clyburn took particular issue with the existing lack of diversity in broadcast station ownership, stating, “there are 67 women-owned broadcast stations, 12 African American-owned stations, clearly our policies must be out of sync because that is not diversity of inclusion by any stretch.”

“Media ownership matters. What we see on the screen says so much about who we are,” she said. “Right now, when you look at the ownership structure [of broadcast stations], it does not reflect the full diversity of this country. I am worried that with more consolidation, that is not going to get better—it’s going to get worse.”

Tracy Rosenberg the executive director of Media Alliance, told IBT “There’s nothing outdated about the media ownership rules” and called them “responsive to what the vast majority of Americans clearly identify as a lack of multiple and diverse sources of local news.”

Rosenberg said the current ownership regulations have “not been strong enough to stave off massive media consolidation over the last few decades” and said Chairman Pai’s comments were not reassuring.

“In a completely consolidated news and information market in the hands of just a few operators, diversity of information will be restricted to the internet. And that is the same internet that the current FCC is preparing to subject to a model of blocking and throttling and fast and slow lanes by planning to gut net neutrality regulations,” Rosenberg said. “If you want to know why American democracy is failing, the Trump FCC is a good place to look”.

The move to vote on lifting media ownership rules marks the latest effort by the FCC under Chairman Pai to remove regulations on companies operating in the media business.

The Commission is currently reviewing a proposed purchase of Tribune Media by the conservative-leaning Sinclair Broadcast Group’s Tribune Media, which would turn Sinclair into a massive broadcasting company with  with 223 TV stations in 108 markets—including 39 of the top 50.

Sinclair would reach 72 of all U.S. households were the merger to pass, which would violate a FCC rule that limits the collective reach of TV stations owned by a single entity to 39 percent of all households. The FCC claimed Sinclair promised to “take such actions as are necessary to comply with the Commission’s rules to obtain FCC approval of the applications” if the merger is approved.

Earlier this year, Sinclair CEO Christopher Ripley told the company’s investors that he expects “this new FCC to tackle the ownership rules more broadly,” said he was “very optimistic about this new FCC and the leadership of Ajit Pai.”

“in terms of what that could lead to on the consolidation size we definitely anticipate that more consolidation will happen, in fact we think it’s a necessary activity within the industry,” Ripley said. “We’re quite optimistic about new leadership there and their plans to deregulate the industry.”