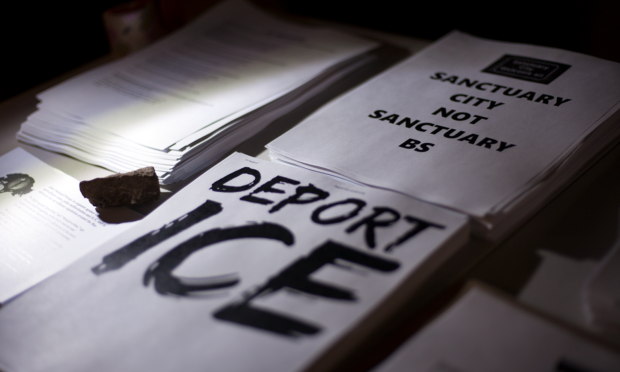 In Oakland, city officials and immigration advocacy groups are preparing for the worst and hoping for the best after an alarm was sounded earlier this month, notifying the Bay Area that federal immigration officials could be planning massive raids on undocumented immigrant communities in the coming weeks.

On January 16, the San Francisco Chronicle reported that federal immigration officials are preparing to arrest more than 1,500 undocumented people in Northern California. This news came the same day that the Oakland City Council passed a resolution further prohibiting the Oakland police department from assisting Immigration and Customs Enforcement (ICE) in immigration enforcement operations. 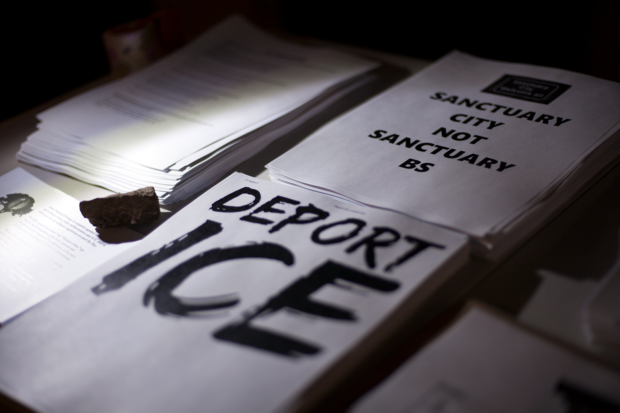 Oakland has been a sanctuary city since 1986, and reaffirmed its status in November, 2016. Sanctuary cities typically limit police cooperation with the federal government in immigration enforcement operations, and do not allow local law enforcement to notify federal agents if they are made aware of someone’s unlawful immigration status in the course of an unrelated arrest.

The council’s January resolution was passed in response to an ICE raid that occurred in August. Officers from the Oakland Police Department (OPD) conducted traffic control for federal agents during the operation, and faced immediate backlash from community groups and the city council. The resolution specified that the OPD cannot work with ICE, even to provide traffic control.

“If you’re going to say providing traffic support doesn’t count as working with them [ICE], well then we’re just going to have to pass a new resolution that says you can’t do that,” said Rebecca Kaplan, city councilmember at-large, and one of the main backers of the resolution, in a November interview. “Not only is it against our policy to collude with ICE, but it’s a waste of our police time. We have actual crime they could be fighting, instead of colluding with ICE.” Kaplan’s office did not return calls seeking comment on the resolution’s January passage.

When asked about the possibility of increased raids in Northern California, James Schwab, public affairs officer for the San Francisco ICE office, said that he was “not able to speculate about future enforcement actions.” Spokespeople for the agency also declined to comment to the San Francisco Chronicle.

Due to the uncertainty of the threat, community organizations, including the Oakland Public School District (OUSD), are implementing protections for students and the community. “The sense of panic is just very palpable,” said Nicole Knight, who heads the OUSD Sanctuary Task Force, which created procedures for the district should there be ICE activity on campuses, or in the surrounding community. “That’s the bottom of the pyramid of addressing the imminent threat of some of our students being separated from families.”

The OUSD is a sanctuary district, and re-confirmed that status in December, 2016. This means that the OUSD does not ask about students’ immigration statuses when they enroll in classes.

Knight doesn’t expect to see ICE officers in Oakland public schools any time soon, but she said the effect that the threat has had on students is clear. “It shows up in lots of different ways. It shows up in reports of increased stress among some of our students that sometimes manifests in behavior problems or just kids coming to school scared,” Knight said.

In October, California legislators passed SB54, the California Values Act, which officially declared the state a sanctuary for undocumented immigrants. This law prevents state law enforcement officers from notifying the federal government if they arrest a person who is in the U.S. illegally on charges not related to their immigration status. However, this does not prevent ICE from conducting raids within the state, or sanctuary cities, including Oakland.

In response to California’s sanctuary state legislation, in October ICE acting director Tom Homan published a statement saying that the law “will negatively impact ICE operations in California,” and that “ICE will have no choice but to conduct at-large arrests in local neighborhoods and at worksites.”

Civil liberties advocates in Oakland have pushed back against Homan’s statement by arguing that declaring sanctuary status is a right of cities and states. “A sanctuary city is a right of states and of the people in communities to make decisions for themselves,” said Tracy Rosenberg, a member of the group Oakland Privacy, which advocated for the city council resolution to further prohibit OPD from cooperating with ICE. “The idea of the federal government retaliating for communities making these decisions for themselves is awful, and it’s putting people at risk.”

In November, Oakland mayor Libby Schaaf issued a statement saying that she supported the city council resolution prohibiting OPD from providing assistance to ICE during raids. Schaaf responded to the most recent threat of increased ICE raids in the Bay Area in an interview with KPIX, calling it intimidation. “We are here to protect all of our residents regardless of where they came from. We are here to make sure that people feel safe,” Schaaf said. The mayor then went on to say that she would be willing to go to jail in order to ensure the enforcement of Oakland’s sanctuary city policy. Representatives in the mayor’s office did to respond for interview requests from Oakland North.

Although Rosenberg doesn’t anticipate seeing Oakland’s mayor behind bars any time soon, she thinks Schaaf’s statement is representative of the atmosphere in Oakland. “It was really good to see parts of the city getting on the bandwagon with that, and I think we’ve seen that over the past months. ICE’s belligerent attitude is a lot of what has caused that to happen,” Rosenberg said. “They [ICE] have gone so far that the notion of community self-defense against ICE has moved from more of a fringe idea to a much more mainstream idea.”