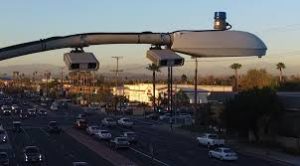 ALAMEDA (KPIX 5) — Another Bay Area city could soon be tracking traffic in and out of town with license plate readers.

But some in Alameda are worried that information could end up in the hands of ICE agents.

Chief Paul Rolleri said, “I mean you can only have so many police officers. They don’t have clairvoyant abilities. But this system will alert them to a car that is wanted for a criminal event.”

The police chief wants to place 13 cameras at the entry and exit points to the city. The system will record the license plate number, date, time and location.

It may be a useful crime fighting tool but opponents are concerned the cameras would rob them of their privacy.

The city council was hearing public comment on the issue late Tuesday night.

Alameda resident Tracy Rosenberg said, “The question is at what price for fighting crime. When it becomes a question of taking my personal travel patterns and everywhere that I go and broadcasting it to — we’re not sure who — then you are really exerting a very high price on both my privacy and my freedom.”

Aside from privacy, critics are also worried the information may aid U.S. Immigration and Customs Enforcement officers.

Alameda resident Mike Katz-Lacabe described it as “mass surveillance at a local level.”

Katz-Lacabe said, “I think we need to do everything we can to prevent sharing of information with ICE that may result in the deportation of our friends and neighbors.”

While the police chief says the data will only be used locally, the license plate readers will be provided by Vigilant Solutions of Livermore, a company which recently entered a contract with ice to provide vehicle location.

The Chief says a strict policy will be put into place to keep the data out of federal hands.

“We are not interested in any way in helping them [ICE] advance that cause. There’s going to be a policy component to this and then we’ve also — within the database — we have turned off the access that ICE would otherwise have to our data, so they can’t see it,” said Chief Rolleri.

The city council asked the chief questions Tuesday night and there was also a representative from Vigilant Solutions who was answering questions about who has access to this data.

The city council meeting was running late into the night on Tuesday, but they will ultimately decide whether to vote on the measure or table it for another night.

These cameras could be in place as early as this year.