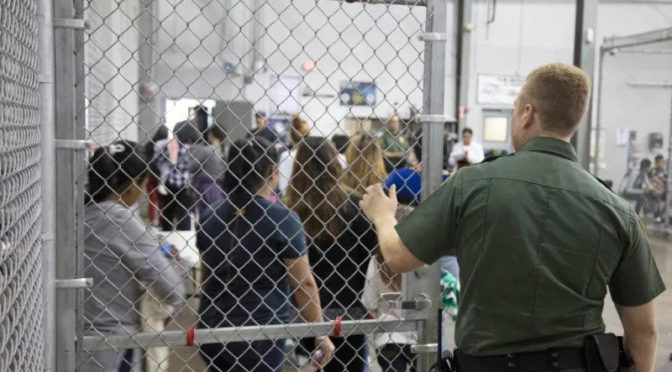 By Dell Cameron and Bryan Menegus – originally published in Gizmodo

Embroiled cloud computing company Salesforce tried to sanitize its image through a hefty donation to the Refugee and Immigrant Center for Education and Legal Services—one of the highest-profile organizations resisting our draconian immigration policy. RAICES said no thanks—and at least six other high-profile organizations are now threatening to cut ties with the company.

Salesforce’s work with U.S. Customs and Border Protection—an agency that, along with U.S. Immigration and Customs Enforcement, is chiefly associated with family separations—was first announced by the company in March, but meaningfully came to light last month when the company’s own employees pressured CEO Mark Benioff to cancel the contract. “Given the inhumane separation of children from their parents currently taking place at the border,” they wrote, “Salesforce should re-examine our contractual relationship with CBP and speak out against its practices.”

Salesforce continues to assist CBP, and Benioff has deflected on the issue while his spokespeople have claimed Salesforce isn’t directly involved in family separations. Microsoft trotted out similar excuses when its own employees protested their company’s contract with ICE.

As Americans’ awareness of the horrific acts committed in the name of “securing our borders” has risen, so too has the profile of organizations helping those targeted by U.S. immigration policies. Among the most-cited is RAICES, a decades-old group headquartered in San Antonio and serving South Texas. Presumably, this influenced Salesforce’s decision to donate a quarter of the $1 million it pledged to help victims of ghoulish government agencies like its current client, CBP.

The donation was summarily rejected by RAICES, which told Salesforce that, “when it comes to supporting oppressive, inhumane, and illegal policies, we want to be clear: the only right action is to stop,” in an email reply written by Executive Director Jonathan Ryan which the organization has since made public. He added, “pledging us a small portion of the money you make from CPB contracts will not distract us from your continuing support of this agency.”

In response to our request for comment on Ryan’s email, Salesforce shared the following tweets from CEO Marc Benioff:

Salesforce always will be true to our core values. We dont work with CBP regarding separation of families. CBP is a customer & follows our TOS. We dont have an agreement with ICE. I’m Proud of the Men & Women who protect & serve our country every day & I’m Proud of our Ohana.

Salesforce has now donated $1M to organizations helping families separated at the U.S. border. I’m proud to work with 30K employees who make their voices heard and serve their communities. @SalesforceOrg will match employee donations to increase our impact.

A spokeswoman did not respond to a request for comment about which other organizations Salesforce had given money to or planned to donate to.

In early July, a slew of petitions asking Salesforce to sever ties with CBP gathered more than 100,000 signatures. Early this week, more than 20 businesses and nonprofits, all of whom are Salesforce customers, published an open letter with a similar request, saying that they could not “in good conscious” ignore the company’s work for CBP. “As long as Salesforce keeps its contracts with Customs and Border Protection, they are still enabling the agency to violate human rights,” the letter said.

The signatories include Greenpeace International, the New York State Nurses Association, OpenMedia, Manhattan Young Democrats, and the Catholic Charities Diocese of St. Pete, among 15 others.

Three organizations confirmed to Gizmodo that, unless Salesforce cut ties with CBP soon, they would end their existing relationships with the company and encourage others to boycott it as well, including: digital-rights group Fight for the Future; Icarus Project, a mental-health support network; and Media Alliance, a media resource and advocacy center founded in 1976.

“What has been happening at the border is unacceptable and to engage in business as usual is to be complicit in cruelty and abuse. We ask Salesforce to do the right thing, not the easy thing,” said Tracy Rosenberg, executive director at Media Alliance.

“The steps taken by Salesforce to help with the immigration crisis in the United States are not enough until the company completely cuts ties with Customs and Border Protection,” added Greenpeace International spokesperson Matt Browner-Hamlin. “We are prepared to review our relationship with Salesforce if the company does not take that critical step.”

The open-internet advocacy group Free Press, another Salesforce customer, said it had pressured the company to end the contract and that hoped it didn’t have to take its business elsewhere. “But that’s something we must consider, if they don’t listen to the concerns of their clients about their involvement with CBP,” said Timothy Karr, Free Press director of strategy and communications.