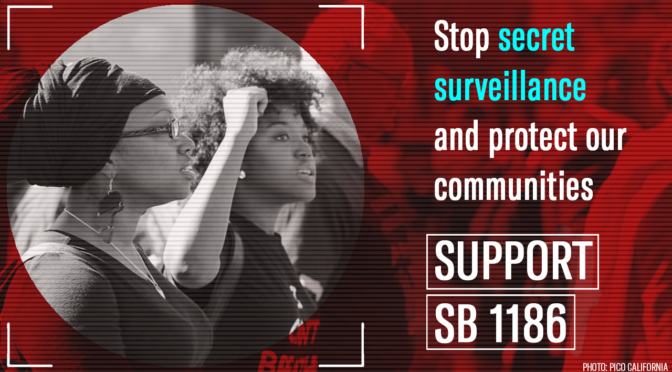 I didn’t grow up in California. Instead I grew up in the relatively staid brick-lined streets of the Northeast, where history looks like pilgrim hats.

But life can take you in some unexpected directions. I grew up to become a privacy advocate on the West Coast. And when I started to lobby my local government about the ways law enforcement surveillance and high-tech gadgetry were colluding to erode civil rights, I ran into the legacy of the autonomous sheriff in the “frontier” states.

Senate Bill 1186, currently in front of California’s legislature, grew out of the City of Oakland’s multi-year fight to stop the Domain Awareness Center, a Homeland Security-funded citywide dragnet of cameras and microphones designed to model a 21st century surveillance city in the traditionally Black and politically feisty town of Oakland. The community rose up and stopped it. After that monumental effort, the question became what about the next time intrusive surveillance came knocking?

An answer was transparency. A law was drafted to mandate that law enforcement agencies had to ask before starting up mass surveillance programs. They have to write use policies laying out what they intended to do and why, where data will be kept and who will have access to it, how much it will cost taxpayers, what the crime-fighting purpose is, and what the civil rights impact will be. In an open forum with public comment, the City Council or Board of Supervisors has to affirmatively consent to the program before it goes forward. Common sense, right? Right. It’s now the law in three California cities, Oakland, Berkeley and Davis, with more to come. The CA State Legislature could make it law in every California city and county at once.

Then there was Stagecoach.

California, home of 7 of the 13 largest county sheriff departments in the country (Los Angeles, Orange, Sacramento, San Bernardino, Riverside, San Diego and Alameda), has a culture of unfettered sheriff autonomy. It’s even written into the state code in Section 25303. Don’t you mess with the sheriffs.

There’s more to public safety than a handful of guys with silver stars. The battle for justice, equity, and a secure community is a mutual effort by the people who live in a neighborhood and the public servants who work for them and on their behalf.

WAMU, DC’s public radio station, recently reported the statistic that sheriffs in America represent a very specific demographic: 95% are male. 99% identify as white. They don’t look like America does in 2018. Unilateral decision making leaves a lot of us out, although we are deeply impacted by how we are watched, tracked and profiled. As my colleague once told the California Legislature, we regulate your average taco truck more than the powerful equipment that records every move we make.

Law enforcement sometimes does the wrong thing. At least when you step outside the movie marquee. There are documented incidents of overreach and abuse; stalking ex-wives and girlfriends, targeting dissidents, journalists or politicians, and shooting unarmed people who commited no crime. Right now, we are caging and sexually assaulting the young children of people seeking asylum

Another state proposal this year drawing opposition from the Sheriff’s association, Senate Bill 1303, dares to ask for counties to have independent medical examiners in charge of autopsies and coroner services. Because sheriffs aren’t doctors. Here in the West, the cause of your death can be what the sheriff says it is.

Since sheriffs are elected, the usual response to these kinds of concerns is that you can go vote out the sheriff if they are doing something our community doesn’t them want them to do. But here’s the rub. In Alameda County where I live, the sheriffs have run for office unopposed. For 30 years and counting. You can’t vote for somebody else when there is nobody else to vote for. .

We say that we have a system of checks and balances. But when it comes to mass surveillance and sheriffs, there is no check and little balance. Often these tools and techniques are used in complete secrecy, as with cell phone interception devices (stingrays) whose use was discovered a decade or so after the fact. Other times, use is unfettered with nary a thought given to protecting civil rights and privacy, including for people who are suspected of no crime and often-targeted communities like Muslims, immigrants, Black people and journalists.

Some voices in Sacramento understand this. The Senate Judiciary committee wrote an analysis where they said it is appropriate for boards of supervisors to set general policies about the balance between protecting individual freedom and the use of intrusive surveillance technologies by county sheriffs, as well as municipal police departments.

Assembly Public Safety Chair Reggie Jones-Sawyer stated at a public safety committee hearing that the completely autonomous sheriff idea needed to be “laid to the side”. He went on to say that sometimes an existing law enforcement policy threatens the community more than protecting it, giving the example of the chokehold, an arrest manuever mostly effective at killing Black men.

That government rules with the consent of the governed is pretty much the soundbite for that Declaration of Independence thing. The sheriffs of Stagecoach may be part of the mythology of manifest destiny, but complete impunity in modern decisions about technology and policing that impact all of us, only works in legends.

It’s time for public policy, in California and elsewhere, to dispense with the Western movie scripts and implement a community consent framework for all law enforcement use of frighteng high-tech surveillance tools and equipment.

In this era of drones, cell phone interceptors and facial recognition software, there is no time to delay.

If you agree, you can say so here.