On September 7th and 8th, I attended the Bay Area’s police militarization expo, Urban Shield. Urban Shield is a competition for the Bay Area’s SWAT teams, fire departments, and hazmat and emergency operations teams and a law enforcement equipment expo, which is funded by the Department of Homeland Security’s UASI program as a counter-terrorism exercise. Coordinated by the Alameda County Sheriff’s Department, it attracts law enforcement agencies from around the region, has included the Homeland Security Investigations division of ICE (in 2017), has hosted a variety of foreign SWAT and secret police teams from countries like Brazil, Israel, Bahrain, and Hong Kong (China) and has been exported in concept to the King Abdullah Special Operations Training Center in Amman, Jordan.

Urban Shield has been the subject of annual protests in the Bay Area since 2013, notably in 2016, when a few dozen people were arrested at the gates to the event. After several heavily attended and contentious public discussions about the impact of military style war games training for local police officers (including one in the City of Berkeley in June of 2017 that itself ended in injured attendees), the Alameda County Board of Supervisors, a year after issuing 12 Principles to try to reform the event, finally pulled the plug. The Board of Supervisors stated that 2018 would be the last year of Urban Shield “as we know it”. The January 2017 12 Principles had asked the event to desist from racial stereotyping, avoid crowd control and surveillance technique training, prevent the sale or transfer of assault weapons at the event, end any participation from countries with a documented history of human rights violations, and exclude vendors whose gear contained derogatory messages.

So to mark this historic occasion, I decided to attend. This is easier said than done.

Despite the massive expenditure of tax dollars, the Urban Shield event is closed to the public with only a few modes of entry. If I were not to start a new career in law enforcement, I was left with being an elected official (I’m not), volunteering to role play a terrorist or hostage in a scenario, or using a press pass. I chose the third option. But despite obediently registering on the event website in advance and generating a press credential, as well as having visibly discussed the event with both KTVU-Channel 2 and Black Agenda Report in 2017, much of the first day was spent in regular negotiations with suspicious Sheriff Department staff. In between the interrogations, most of my time was spent in the Expo, a trade show that features the latest and greatest in militarized policing gear.

In the salad days of Urban Shield (the event began in 2007), the expo featured a large collection of macho right-wing t-shirts, including a “Black Rifles Matter” dig at BLM and a “This Is My Peace Sign” rifle butt. Distributors like Safariland displayed impressive piles of assault weapons. Nowadays, it is a much more muted affair. But appearances do not tell the whole tale. 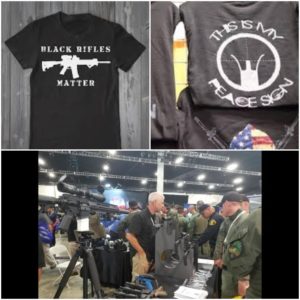 As always, vendors pushed their wares with a heaping of military bona fides, explaining to me how products were military-grade, developed in the military, battlefield-proven and basically from disinfectant to drone and everything in between, were on the fast track from Fallujah to my local law enforcement agency.

My first vendor visit was to Net Gear, who were selling surveillance cameras. After some small talk, I looked at some literature while the salesperson started discussing the product with a SWAT team officer from American Canyon and explaining how the cameras could be hidden in trees during protests. Despite my best efforts, I assume my ears pricked up, because the salesman put some distance between me and his conversation with the officer, loudly saying that “there were certain people at the event you couldn’t talk about some stuff in front of”. The “stuff” being the 12 Principles which had nixed surveillance methods and crowd control techniques from the event and expo. The vendor comments seemed to indicate the implementation of the principles at the event had been more along the lines of “don’t get caught”. The response of the Alameda County Sheriff employee from the public information office who was standing within earshot of the vendor making the comment was to reprimand me for making the vendor uncomfortable rather than reprimand the vendor for violating the ground rules for the event.

Another booth featured facial recognition technology from Gemalto. The demo unit was pulling faces from the Minneappolis state drivers license database and used a Puerto Rican name and image for sampling purposes (Miguel Rafael Alfau-Aleman). The booth also scanned my face effortlessly and identified me efficiently within moments, a request I had actually not made.

Other booths featured a battering ram booth from Bear Training Solutions (BTS), which SWAT officers attempted to pound into submission, which led to great crashing sounds throughout the day and two cleverly placed side by side booth featuring a drone manufacturer and Drone Killer equipment to knock hostile drones out of the sky. Due to the board of supervisor’s edict, assault weapons had been replaced with simunition guns, although flashbangs and gas canisters remained. The raffle drawing prize was a gift certificate at a weapons distributor. 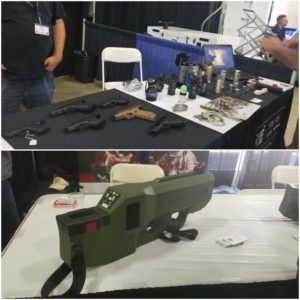 The prognosis for attending the following day, when the SWAT, fire and emergency operation drills would get underway, was not looking too good, given the numerous visits from public information staff during the first day. After some dialogue with county task force members, a seat was navigated on a guided tour for Saturday’s exercises. The group that included task force members, City of Alameda staff and some press was taken to four exercise locations on Saturday.

The day began with a meetup at the one public facing Urban Shield event, a 2017 addition called the Urban Shield community fair. As in 2017, it was held in a church parking lot in Castro Valley, despite some reported attempts to move it to a more transit-accessible location. The 2017 event had been marred by the presence of the Oath Keepers, a right-wing extremist group whose presence at a booth dispensing their literature was captured by a KTVU news clip in 2017. The Oath Keepers were not present in 2018, and the event mostly featured a police horse petting area, an earthquake simulator, a stop-the-bleeding class, and info booths for groups like the Bay Area Young Marines.

The first SWAT competition drill we attended was at the office of Adamson Police Products in Livermore, a law enforcement vendor for SWAT tactical gear and weapons. Oddly, this vendor was hosting an exercise pegged as featuring deescalation techniques and the use of non-lethal equipment. This turned out to be Pepperball, which are pepper spray projectiles shot from guns. Pepperball was sponsoring the exercise, which was carried out using their equipment.

The group was told we could not witness the exercise live (this proved to pretty much be the case at all of the locations), so we watched it in the so-called “situation room” on closed circuit television. The scenario was a house where two hostages were being held, one visibly and one in a room behind the main one, and the goal was to get into the apartment and free both hostages without killing anyone. The Sacramento SWAT team ended up disabling the perpetrators with Pepperball shots.

Our second exercise was out at the former Concord Naval Weapons Center, once the site of Port Chicago, where 300 people were killed in an ammunition explosion and African American workers were court martialed after they refused to continue loading ammunition, a key moment in the civil righs movement. This location was being used for a CERT exercise. CERT, the community emergency response team, trains members of the community to perform basic disaster response and certifies them as civilian responders. The CERT exercises at Urban Shield are carried out in isolation from the other first responder exercises. In this case, they consisted of a dilapidated building and the participants were going door to door tending to actors who were portraying earthquake victims. Since we were watching the exercise from a great distance, it was impossible to actually see what the CERT trainees were doing apart from going door to door in small groups and labeling the doors after they left, but we spent some time at the makeup booth where volunteers were assembling fake blood, broken bones and fake open wounds to put on the victim actors. I learned a great deal about arts and crafts recipes for making wound art.

The third exercise we attended was at a Redwood City credit union and was a SWAT tactical exercise in a parking lot sponsored by Execushield, a military security outfit. The premise was a “dirty bomb”. Terrorists had stolen radioactive material from a laboratory and were making and deploying a bomb. The exercise was apocalyptic, meaning that the hazardous materials were stolen without protective equipment. Killing the perpetrators was described as academic since they had already been exposed to lethal levels of radioactivity. Basically, the SWAT team was to storm their way into the parking lot, shoot their way through the terrorists and then call an imaginary hazmat team in time to prevent the explosion. Unfortunately, the SWAT team that was supposed to carry out the exercise was said to have dropped out of the event, so all the group was able to do was get a guided tour of the empty parking lot by an Execushield employee. As with the next exercise, one of the notable things in the tour was the imaginary hazmat team who would magically be in the right place at the right time with the right equipment to disable the bomb at the snap of a finger once the coast was clear, which didn’t seem quite like the hyper-realistic training Urban Shield is said to offer. Regional hazmat teams were engaging in their own solitary exercises elsewhere, presumably also summoning imaginary SWAT and fire teams when needed.

The fourth exercise of the day, and the third drill of the SWAT team competition, was sponsored by Facebook and held at some nondescript office building a few blocks from Hacker Way. It was an active shooter drill in a basically empty office suite that featured a shot victim who would, if asked, direct the SWAT team to where the shooter was with some live hostages. The main premise of the exercise was to remember to ask the shooting victim the question, as they would not volunteer the information without being asked. We inquired regarding medical assistance for the shot victim, and again an imaginary medical team would be summoned, while the SWAT team prepared to storm the rear office. The exercise was again watchable from a situation room on closed circuit camera. Central Contra Costa County SWAT carried out the exercise. The Central County SWAT team is made up of officers from BART PD, Martinez PD, Pleasant Hill PD, San Ramon PD, and Walnut Creek PD.

After the event was concluded, The Alameda Sun newspaper reported that a tactical exercise during the 2018 Urban Shield event was held in protected marine bird sanctuary land on Alameda Point. The exercise, which focused on a diplomatic entourage, set off simunition bombs and was captured on a videotape put out by the Alameda County Sheriff’s department.