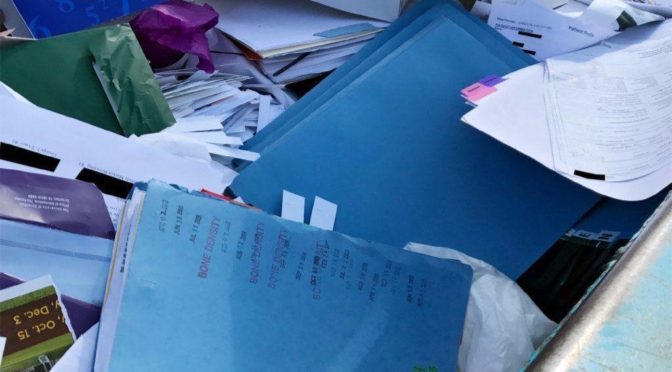 A bill introduced in the CA State Legislature by Senator Ben Hueso cloaks in reasonable-sounding language a determined effort to trash the Public Records Act.

The passage of Senate Bill 1421 and Assembly Bill 748 in 2018, which placed police misconduct records and law enforcement body camera videos into the public records domain, have greatly expanded the body of documents available via California’s Public Records Act.

But Senate Bill 615 adds two new monumental hurdles to a process that can already be opaque and lengthy.

The first new requirement compels a “meet-and-confer” session between a requester and an agency prior to a requester being able to ask for legal relief.

The second new requirement shifts the burden of proof in a lawsuit against an agency to the requester, who has to prove by a preponderance of the evidence that the agency’s behavior was knowing and willful in order to recover costs for filing a suit.

San Diego’s City Attorney Mara Elliott wrote an editorial in the Times of San Diego on March 3 arguing that the bill is nothing more than “streamlining” the Public Records Act.

Here is why that argument fails the sniff test.

Journalists, academic researchers, and activists often file public records requests miles away from where they reside and work. Meet and confer requirements can impose a significant financial burden if every request is accompanied by a need for travel to the location in question. Agencies that prefer to avoid transparency have every incentive to delay release in favor of a “meet and confer” since they face no enforcement action until such a meeting occurs. The law does not require an agency to participate on any timeline, meaning that records requests can be delayed indefinitely by the failure to schedule such a meeting, even if a requester demands one. This is the exact opposite of streamlining.

Shifting the burden of proof from the agency failing to disclose records to the requester sets up significant hurdles. The knowing and willful standard allows agencies the defense of incompetence. Attorneys are even less likely than usual to take on public records cases if the ability to recover fees is tied to proving that a non-disclosing agency was purposely, rather than just factually, violating the law. This leaves requesters without lots of money almost completely unable to enforce the Public Records Act or to secure records, among them the families of victims of police homicides, who were intended beneficiaries of the passage of Senate Bill 1421.

To join the fight, here is how to contact Senator Ben Hueso’s office and say no way to gutting the California Public Records Act.