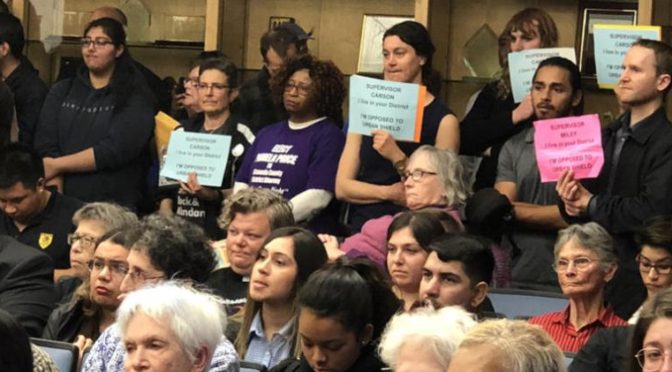 Update: At the March 14 meeting of the DHS Approval Authority in Dublin, the Urban Shield SWAT drill and weapons show was suspended for 2019, after the Alameda County Board of Supervisors endorsed a 60-recommendation package to demilitarize the disaster preparedness exercise.

The Homeland Security funding body indicated a new RFP for a regional emergency exercise would be issued in 2019. The suspension, and practical end, of Urban Shield, follows five years of escalating community complaints about racism, xenophobia, sanctuary violations and the event’s violent scenarios.

Alameda County Board Chair Richard Valle, who attended the DHS meeting, asked Homeland Security to “forgive him for his compassion” and read aloud several of the recommendations for change, saying he had been “driven to vote for them.”

On February 26, after a board meeting that ran for almost seven hours, the Alameda County Board of Supervisors voted 4-0 to transform the controversial weapon expo and war games drill into a “peacetime mobilization” for natural disasters and community resilience in the face of catastrophe.

Acting to accept 60 of 63 recommendations from their second ad-hoc committee convened to help make the transition, the Supervisors made good on their 2018 pledge to “end Urban Shield as we know it”.

Use this easy one click action to thank them for listening to five long years of appeals from the community.

The adopted task force recommendations include an end to the weapons expo, the end of SWAT deployment scenarios, an end of team competition, evaluation protocols that devalue violent outcomes, greater emphasis on fire and public health training and a host of other changes, including the departure of the “Urban Shield” name.

The new proposal for the training exercise will go to the local Homeland Security UASI board on March 14, which will have to decide to accept Alameda County’s new vision or to not renew the DHS grant.