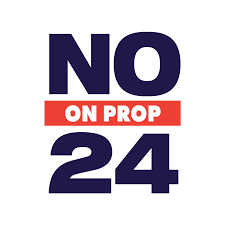 Alastair Mactaggart, the San Francisco developer, wrote and financed Prop 24 to enhance or adjust provisions of his previous initiative, the California Consumer Privacy Act of 2018 (CCPA).

Prop 24 would require businesses to provide customers with an opt-out regarding the collection of their private data and would limit how that information is used and stored.

“Prop 24 aims to give California privacy-first protection like Europe has under the General Data Protection Regulation since 2016,” Mactaggart told Digital Privacy News.

“Privacy laws aren’t just about who’s looking at you,” he said. “It’s about power.

“Some Big Tech companies know when you get up, what you search for, what you read.

“Privacy laws aren’t just about who’s looking at you. It’s about power.”

“They know more about you than any other person and can predict what actions you might take.”

Mactaggart contributed nearly $5.9 million to next week’s ballot initiative, according to public databases, while opponents have raised more than $158,000 to defeat it.

Supporters say Prop 24 will strengthen and enforce California’s privacy laws, will give consumers more control over personal data and will limit usage of private information such as location, sex, age and health.

But opponents say the initiative will create a pay-for-privacy structure, requiring residents to pay companies more money to keep their data private, and will give Big Tech exploitable loopholes. Prop 24 also is difficult to amend, they argue.

The initiative’s supporters include such groups as Consumer Watchdog and the California NAACP, as well as former 2020 Democratic presidential candidate Andrew Yang.

“After this becomes the law in California, I believe other states are going to look up and say, ‘Why do Californians have all these data and privacy rights that we don’t have?’” Yang told ABC 7 News in San Francisco last week. “So as usual, California could end up leading the way.”

Yang, who serves as chairman of Prop 24’s advisory board, did not return requests for comment from Digital Privacy News.

Jamie Court, president of Consumer Watchdog in Santa Monica, told Digital Privacy News that “Prop 24 enshrines and protects the landmark privacy law we have, and it extends it.

“California could end up leading the way.”

“It would create the toughest privacy law in America — and it doesn’t take anything away from our state.”

Tom Elias, writer for the syndicated California Focus column that is published in 92 newspapers statewide, called the initiative “an improvement on what we’ve got.

“Obviously, our progress right now is incremental,” he added. “I know the Prop’s opponents are very dissatisfied with it because it’s not perfect.

“We should try to avoid letting perfect be the enemy of good.

“We must take steps toward progress if we want to get anywhere,” Elias said.

“We should try to avoid letting perfect be the enemy of good.”

But the Consumer Federation of California (CFC) and other opponents told Digital Privacy News that Prop 24 doesn’t do enough to strengthen current laws or weakened them.

“Many organizations such as the ACLU and the League of Women Voters of California do acknowledge that it contains some very modest improvements in privacy,” said Richard Holober, CFC’s president.

“But when you look at the totality of all 52 pages, it contains some takeaways from privacy rights that are in current law — and these takeaways are much more profound than the modest improvements.”

The ACLU said of Prop 24: “For every one step forward, two steps back.”

The League of Women Voters of Solano County argued that “Prop 24 includes some beneficial elements, but we oppose due to the complexity of a 52-page initiative with impacts and nuances that are difficult for voters to discern and rollbacks to existing protections.”

Holober said a main concern was that Prop 24, once enshrined, would be tough to amend.

He and other opponents called the initiative a mixed bag of good and bad adjustments — and being unable to easily amend it made it fairly permanent.

Holober cited this section, for instance: “The law should be amended, if necessary, to improve its operation, provided that the amendments do not compromise or weaken consumer privacy, while giving attention to the impact on business and innovation.”

In other words, any amendments must consider business concerns, which could range from targeted advertisements to facial-recognition technology, he said.

“The Prop it may be amended if necessary to improve its operation, not if desirable as a policy matter to strengthen privacy,” Holober told Digital Privacy News.

“Any amendment that attempts to improve privacy will immediately be challenged, go to court — and likely get struck down.”

‘Puts Up a Hurdle’

Tracy Rosenberg, advocacy director of Oakland Privacy, observed: “Businesses have the ability to go to court and challenge any future privacy legislation.

“Even if the businesses don’t win in court, it still puts up a hurdle, as it discourages legislation because they want to avoid lawsuits.

“I don’t understand why you would want to make it so difficult to change things down the line, especially since technology and forms of data-collection change so frequently,” she said. “I don’t think it serves the interest of consumers.”

“Even if the businesses don’t win in court, it still puts up a hurdle.”

“Facebook and Amazon declared themselves service providers — and 24 has all sorts of loopholes that give service providers a greater ability not to sell, but to abuse your information,” CFC’s Holober told Digital Privacy News.

However, Prop 24 would hurt Big Tech more than it will help, Consumer Watchdog’s Court said.

“They don’t like it and it will totally change their business model in a way they don’t want,” he said. “They don’t want to answer to a European-style privacy agency.

It would create the toughest privacy law in America — and it doesn’t take anything away from our state.”

Prop 24 also would change the definition of “publicly available information” to include things like pictures uploaded to social media, Oakland Privacy’s Rosenberg said.

“People usually post pictures of things like their daughter’s 13th birthday to show off to their friends and family,” she posed. “That is the intent of such pictures.

“However, by declaring it as ‘widely distributed media,’ all controls come off — and companies can use such information for different purposes than intended.”

Rosenberg cited how Clearview AI came under fire from the ACLU and other privacy groups after news reports that it had scraped social media images and used its face software to identify individuals in the photos.

Clearview then sold its services to law-enforcement agencies. California and three other states since have sued Clearview for First Amendment violations.

Tor Ekeland, a Clearview lawyer, told The New York Times in a May statement: “Clearview AI is a search engine that uses only publicly available images accessible on the internet.

“It is absurd that the ACLU wants to censor which search engines people can use to access public information on the internet.

“The First Amendment forbids this,” he said.

Still, Rosenberg told Digital Privacy News: “Clearview AI is just the clearest example that we have of a bad actor — but as we’ve seen in technology, if one startup thinks of it, then others will too.

“Even if Clearview is shut down, eventually someone else will create something similar,” she added. “So, we don’t want to sanction and condone it in law.”

One of the main concerns about Prop 24 is that it will establish a pay-for-privacy structure, where users must pay more to Big Tech companies to keep their privacy intact.

“It is a pay-for privacy-scheme that treats privacy as a luxury,” Holober told Digital Privacy News. “We believe privacy is a right that you shouldn’t have to pay extra for.”

“It contains some takeaways from privacy rights that are in current law — and these takeaways are much more profound than the modest improvements.”

Holober noted that the rule disproportionately would affect lower-income Californians, pointing to such opposition groups as Color of Change and the California Alliance for Retired Americans.

However, Prop 24’s proponents contend that the pay-for-privacy clause would not change much.

“We already have a pay-for-privacy law in the state,” said Consumer Watchdog’s Court. “Prop 24 only makes that law better. It doesn’t increase it.

“So, all of the things Prop 24’s opponents point to are already problems with the current law,” he added.

“Prop 24 dramatically increases the capacity to enforce privacy laws and to enter new standards, like the right to delete and to minimize data and to not allow sensitive information to be used.”

Regardless of their differences on Prop 24, both sides say individual privacy is worth protecting.

“Prop 24 is the most important thing on the ballot this time,” columnist Elias told Digital Privacy News. “There are many different propositions that represent a wide variety of interests — but this one has the most meaning for the greatest number of people.”