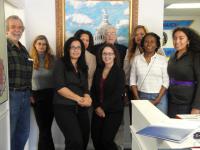 MA teamed with the LA Media Reform group to travel down to Orange County and the Inland Empire and speak to Dems who aren’t supporting net neutrality.

The visits were good conversations and left us hopeful that our Internet future may be bright.

If we’ve inspired *you* to pay a visit to your representatives and make sure they are on board with net neutrality: here’s a handy guide to legislative visits:

For most of the past year, public interest groups worried about the future of the Internet have pushed for action on net neutrality by the Federal Communications Commission. In response to that call, Chairman Julius Genachowski moved in the spring to reclassify broadband services, proposing a light regulatory protocol as a “third way”.

After that didn’t exactly take off, the chair convened meetings with industry including AT&T, Skype, Verizon and Google, meetings that broke down after Google and Verizon announced a deal that would introduce paid content prioritization. In the ensuing uproar, the issue once again rose to the level of a burning public debate with right-wing accusations of “Obamacare for the Internet” competing with public interest laments about slow lanes on the Internet to come for alternative news, independent artists and musicians, and community groups. END_OF_DOCUMENT_TOKEN_TO_BE_REPLACED 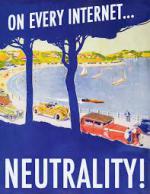 Posted by Tracy Rosenberg on May 24th, 2014
Huffington Post

Rhetoric and reality sometimes diverge. Right now, the future of the Internet is hooked like a fish between two different paths.

On December 16, 2013, I met FCC chairman Tom Wheeler at an Oakland town hall meeting, and I used my two minutes to talk about reclassification, a term that means making whole the regulatory split that is going to create a two-tiered Internet. The chairman nodded, took notes, and at the end of the presentation mentioned the importance of a “network compact”.

I had just finished reading “Net Effects; The Past, Present and Future Impact Of Our Networks” by FCC chairman Tom Wheeler. Perhaps surprisingly for someone so upset by Wheeler’s proposals that if I lived closer to DC I’d have been camping in front of the FCC, I agreed with much of what Wheeler wrote. END_OF_DOCUMENT_TOKEN_TO_BE_REPLACED

Viewing an episode of your favorite show may become a matter of speed, fast or slow. Trying to watch that season finale of Game of Thrones or that premiere of Orange is the New Black could become an experience based on how much you’re willing to pay.

The way we watch our shows online, or anything online, for that matter, could face some significant changes under the Federal Communications Commission’s new proposal. In May, the FCC voted 3-2 to proceed with Chairman Tom Wheeler’s proposed “Open Internet,” which would essentially allow for Internet Service Providers to prioritize certain sites like Netflix and YouTube, and charge users premium fees for accessing them at a faster pace.

END_OF_DOCUMENT_TOKEN_TO_BE_REPLACED

This video is a quick tour of the two July 23rd rallies, one in Silicon Valley and the other in Los Angeles, where activists brought together by a dozen different groups, made sure the visiting president had an open internet on his mind.

The second community town hall on net neutrality: thrown by the media justice community because the FCC would not.

The event took place on November 20th at SF City Hall, sponsored by Jay Nath, the CTO of the City of San Francisco, and hosted by a variety of groups including Media Alliance, Electronic Frontier Foundation, Common Cause, Free Press and the Center for Media Justice/Mag-Net.

When Barack Obama came out publicly for the reclassification of the Internet as a public utility, his announcement indicated that the decades-long battle to maintain neutrality on the Web had entered a new high-profile stage.

From a wonky side discussion found mostly in the technology sections of major newspapers and on computer blogs, net neutrality had suddenly morphed into a national obsession, filling up late-night TV and social-media feeds with one meme after another and finally crashing the FCC’s website with 4 million public comments. END_OF_DOCUMENT_TOKEN_TO_BE_REPLACED 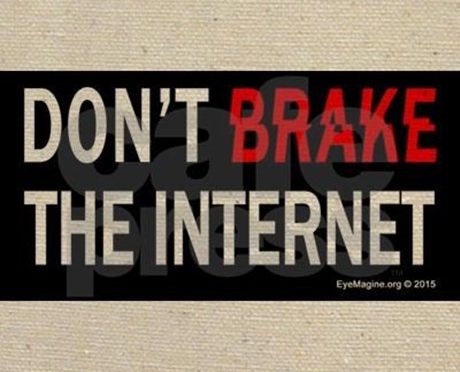