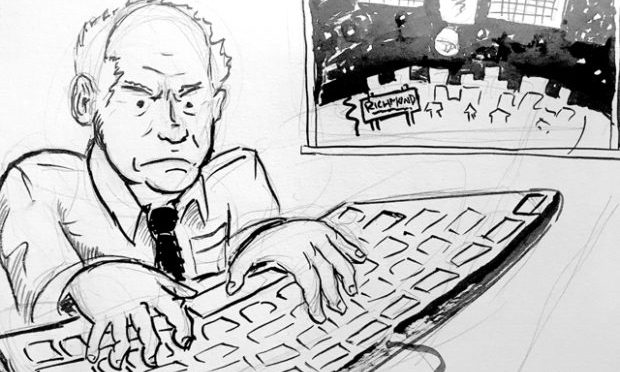 By Sara Harrison. Originally published in the Richmond Confidential

Opponents – and even supporters – of Tom Butt say Richmond’s mayor is guilty of what one critic described as a “flagrant abuse of power” and a council member called “highly inappropriate” actions.

Emails between the mayor and residents, obtained by Richmond Confidential, indicate that many in the community were alarmed when the mayor used his regular “e-forum” to doxx political adversaries, sharing their home addresses and accusing them of violating Richmond’s rent control ordinance.

Butt rejects claims that he overstepped his bounds and has steadfastly defended his actions. But the drama could move outside City Hall, as the American Civil Liberties Union of Northern California is reportedly looking into the controversy.

It all began earlier this fall, when Richmond Confidential quoted resident Eli Moore in an October 3 article about a new ferry service coming to the city. Butt, a major proponent of the ferry, took issue with Moore’s assessment that, while the ferry will greatly improve access to San Francisco, many residents will not benefit equally from the service.

A day after the story’s publication, in his weekly email dispatch known as the “Tom Butt E-Forum,” the mayor responded to the article by accusing Moore of “embracing the dark side.”

He went on to say that “only Eli Moore and [his employer] the Hass Institute can find a way to make a lemon out of lemonade, finding a way to anticipate Richmond ferry service with pessimism and cynicism.”

Butt sent two additional e-blasts, as well, including one that revealed the location of Moore’s home, complete with an accusation that he and his wife, Claudia Jimenez, were violating Richmond’s rent-control ordinance by renting out their home while traveling abroad.

Specifically, Butt alleged that the couple is illegally renting out their backyard in-law apartment, which the mayor claims has neither been assessed by the city nor permitted for residential use.

The emails even included satellite images of Moore and Jimenez’s home and their address. According to Butt, the couple could face a $1,000 fine or up to six months in jail.

The mayor estimates that his emails reach several thousand people in Richmond.

Now, some residents and officials are asking whether it was ethical — and legal — for the mayor to doxx Moore and Jimenez.

He also said that other landlords in Richmond violate the rent control ordinance, but that he had never “seen this kind of investigative work” to seek them out.

The councilmember also pointed out that this is not the first time Butt has gone after political opponents. When Richmond Progressive Alliance member Marilyn Langlois ran for city council this year, for instance, the mayor used his e-forum to inform voters that she believes the U.S. government was behind the 9/11 terrorist attacks.

“It’s like anybody who is an opponent or threat, he goes after them,” he said.

Butt argued that, while Moore and Jimenez may not be elected officials, they should be open to the same kind of scrutiny. “If you’re heavily involved in politics and you’re an author of papers about Richmond at the Haas Institute, if you’re on the steering committee of the RPA, then you’re a public person,” he said. “And the public has a right to know everything about you.”

But Tracy Rosenberg with Oakland Privacy, a nonprofit that works to defend East Bay residents from government surveillance, described Butt’s contact with Moore’s employer as “abuse of his public position and prominence.”

“The idea that there was any sort of retaliation [for Moore’s quotation] from a public official is a violation of the norms of public service,” she said, “and it’s ugly.”

In one email to a constituent, dated October 9, Butt explained that the Haas Institute should “know what a hypocrite Moore is. Perhaps they will reassign him off the Richmond beat.”

Rachelle Galloway-Popotas, a representative of the Haas Institute, said it is not commenting on the issue, and that the Institute is “firmly and deeply supportive of the work that Eli Moore has been involved in here.”

The local ACLU chapter was made aware of the situation in early October, and has requested city records and emails related not only to the mayor’s e-forum, but also any other instances of Butt stepping into rent control disputes.

In a public records request filed October 13, the ACLU stated it was “concerned that Mayor Butt is using his public position to target Mr. Moore and Ms. Jimenez for exercising their constitutional right to free speech.”

Butt’s quibbles with Moore and Jimenez date back to 2015, when Moore and the Haas Institute published a study on the effects of gentrification and development in Richmond. Butt said the report discouraged UC Berkeley from pursuing the Global Campus project in Richmond.

The mayor has also had an ongoing disagreement with Jimenez — a member of the RPA steering committee — who he describes as one of the “chief architects” of Richmond’s rent control ordinance. Butt opposes the ordinance and calls its administration “chaotic.”

According to city emails, Butt’s claims about the couple’s rental house stem from an anonymous source, brought to the mayor’s attention by his son Daniel Butt.

Daniel Butt declined to name his source. He did, however, characterize them as a disgruntled neighbor and “former longtime RPA supporter that got turned off by their close mindedness about things.”

The Contra Costa County Assessor says the separate building on Moore’s property has been there since 1947, and was assessed as an in-law unit as recently as 2012, when it last changed hands.

The Richmond community’s response to the feud has been mixed, varying from condemnation of the mayor’s actions to outright support.

In one email obtained by Richmond Confidential, a constituent characterized the attack as a “blatant abuse of power.” It read: “What the heck are you trying to do? Do you believe that using your position and power to single out a family, trolling them at work and online AND in your eform is something we have tasked you to do as mayor?”

In another email, a Marina Bay resident write that the mayor “is a lonely voice [in] a sea of ‘progressives’ that pass idiotic laws. Keep up the good fight!”

Another constituent disagreed, writing that the mayor was “a smart man and capable of being a good civic leader,” but that he should “[p]lease stop acting like a 10 year old.”

The local ACLU chapter did not respond to multiple phone calls and emails to discuss Butt’s email newsletter.

Moore and Jimenez also declined to comment for this article.

In an email from Jimenez to Butt obtained by Richmond Confidential, Jimenez characterized the mayor’s actions as a political attack. “I wonder how many Richmond citizens have been impacted by a mayor who uses his power to attack them just because they have a different opinion,” she wrote on October 6.

Butt has steadfastly stood by his actions, though he does acknowledge that his pursuit of Moore and Jimenez has been dogged, to say the least. “I guess I tend not to leave things lie,” he said.

“I just don’t like to let anyone have the last word.”