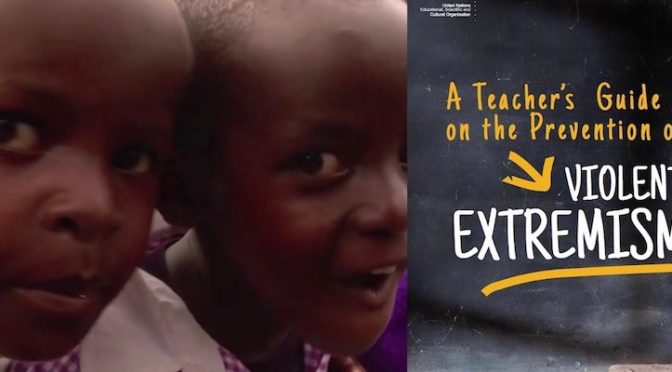 The program deputizes teachers to spy on students and recruits social service agencies to assemble dossiers on them while providing mental health services.

“The state is is lipsticking the pig for federal agencies that rely on racist stereotyping.”

California’s “Preventing Violent Extremism (PVE)” program flags teenage kids “feeling alienated from their peers,” “having a strong sense of being troubled by injustice,” and suffering from “depression” as also having “tendencies to extremism” that should be closely monitored. And surprise surprise, these kids are disproportionately Black and Brown. The program deputizes teachers to spy on them and recruits social service agencies to assemble dossiers on them while providing mental health services.

I spoke to Tracy Rosenberg, Executive Director of Media Alliance, about the program’s history and the coalition fighting it.

Ann Garrison: Tracy, tell us who’s come together to fight this nonsense.

AG: Now tell us a bit about PVE’s history.

TR: PVE began as CVE—Countering Violent Extremism —a federal program funded by the Department of Homeland Security (DHS) under the Obama Administration. This was well before leaked documents revealed that the FBI, apart from DHS, was targeting what it called “Black identity extremists” for even more surveillance than the rest of us.

CVE’s purpose was to give grants to social service agencies that work with youth (primarily adjunct to the schools) and immigrant communities to prevent or counter what they called extremism, radicalism, and incipient terrorism. The agencies were to suggest ways they could work to “prevent” or “counter” terrorism, which included monitoring potential extremists.

“This was well before leaked documents revealed that the FBI was targeting what it called ‘Black identity extremists.’”

The program came under intense criticism during the Obama administration for focusing almost entirely on Muslim communities and potential Islamic extremism and ignoring white supremacist violence. Critics accused its administrators of using schools and social services to stigmatize and surveil Muslims. In response to the criticisms, DHS attempted to redirect some grants to focus on “white extremism,” which then caused the incoming Trump administration to dismantle the federal program. It is no longer giving out grants, although some local programs are still operating without them.

AG: And that’s when California came in?

TR: Yes. In 2018, two years after Trump took office, California jumped into the breach. The California Office of Emergency Services launched their own version of “Countering Violent Extremism,” using the name “Preventing Violent Extremism.” As a pilot program, it gave out five grants of $125K each, one going to 211 San Diego, a social services hotline that “shares data” with Homeland Security; one going to HADI, a San Bernardino company that is a long-time NSA language contractor which is developing an anti-terrorism curriculum for the San Bernardino schools; one to the Orange County Human Relations Commission; and one to the Simon Wiesenthal Center in L.A. Opening Doors  in Sacramento, an immigrant resettlement group, was promised a grant that it eventually turned down due to pressure from Sacramento immigration advocates.

AG: The state program  seems to be supported by state funds administered by the state branch of the Department of Homeland Security, so the change seems largely cosmetic. Is it?

TR: Yes, the program relies on DHS funds that are doled out to the states for counterterrorism programs, so in a sense it is just an outsourcing of the old CVE program. California’s Office of Emergency Services claims they will administer the program with “California Values,” but because of the grant language, they are tied to existing Homeland Security requirements about how terrorism is defined, and the programs must have a nexus to terrorism and counterterrorism. Several applicants were turned down, including UCSF Hospital’s Project Wraparound, because they were violence prevention programs that lacked a direct “nexus to terrorism.”

AG: Wow. Is it easier to challenge this at the state rather than federal level?

TR: Possibly. Certainly the state of California says a lot of things about objecting to the xenophobia of the Trump Administration. We think this is an opportunity to demonstrate that they mean it. Continuing to allow the program to go forward with cosmetic changes is lipsticking the pig of a CVE program that distorted desperately needed social support, educational support, and violence prevention programs into spying vehicles for rogue federal agencies that rely on racist stereotyping.

AG: When did the anti-Muslim  Clarion Group  get involved and what are they up to?

TR: The Clarion Group is most famous for their agitprop films about the Muslim threat to the US and the alleged spread of sharia law, and for inserting millions of copies of their Islamophobic DVD “Obsession” inside the newspapers that were delivered to doors in 2008, just before the presidential election. (Most people still had the morning paper delivered even that recently.) They did this in battleground states to associate candidate Barack Obama with Islamic extremism.

Now they’ve undertaken a 23-state “Preventing Violent Extremism” program of their own. They reach out to schools in California, putting particular effort into San Bernardino and Orange Counties. This has meant that the state program and a privately funded hate group were operating under the same name in the same cities.

AG: Didn’t the state follow suit by renaming “Preventing Violent Extremism,” turning PVE into CSC, “Creating Safer Communities,” or something like that?

TR: That’s right, but the state didn’t explain the name change. Coalition member Media Alliance wrote a letter to Governor Newsom pointing out the problem with the state of California and an anti-Muslim hate group running parallel programs with the same name, but he didn’t tell us that’s why the program was rebranded, and he’s been otherwise unresponsive regarding its dangers and racism.

However, a number of state legislators, most of whom were totally unaware of the program’s existence, have expressed concern. The most promising news is that the renamed “Creating Safer Communities” program is requesting some direct state funding this upcoming year, so we’ll get the opportunity to talk about that budget allotment and why it shouldn’t happen.

We’ve still got a lot of work ahead of us, but we’re optimistic that despite the constantly changing names, these counterterrorism programs that turn teachers into informants and social workers into psychics with crystal balls to catch incipient terrorists, will go deservedly extinct.

Ann Garrison is an independent journalist based in the San Francisco Bay Area. In 2014, she received the Victoire   Ingabire Umuhoza Democracy and  Peace Prize    for her reporting on conflict in the African Great Lakes region. She can be reached at ann@anngarrison.com.