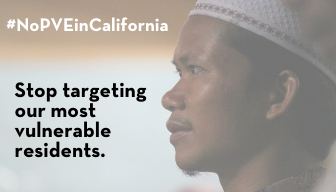 Update 6/30/2020. California’s state legislature has removed state staffing funding for the Preventing Violent Extremism program from the 2021 CA state budget. The NoPVEinCA Coalition celebrates the critical step taken by the state Legislature and the Committee on Budget to refuse state funding for PVE and CSC, surveillance programs modeled after the DHS and FBI’s “Countering Violent Extremism” (CVE) program, in response to community demands amplified and supported by the Coalition’s work.

“Oakland Privacy completely rejects the methodology of CVE and CSC programs. Funding social service agencies and educational institutions to profile their constituencies as incipient terrorists based on religious or racial markers and vague behavioral characteristics will not keep us safe. Defunding these programs continues California’s rejection of the racist and xenophobic iniatives devised by the federal government that seek to criminalize the immigrant experience. Young people of color, in particular, deserve our support as they explore their identities. Educators and social service agencies should not be deputized as the eyes and ears of the surveillance state.”

A hate speech problem. A group called the Clarion Project, identified by both the Southern Poverty Law Center and the Center for American Progress as an Anti-Muslim hate group, has decided to get in on the preventing extremism project.

Clarion announced their *own” Preventing Violent Extremism program, a 21-city community outreach program focused on schools and targeting some of the same Southern California communities in San Bernardino and Orange County that will have state-funded programs with the same name.

The Clarion Project is most well-known for two things: hyperbolic documentary films and its Fox News security analyst, Ryan Mauro. One of Clarion Project’s documentaries Obsession, Radical Islam’s War on the West made national headlines when 28 million DVD copies were distributed in 70 print newspapers in battleground states in 2008, just weeks before the presidential election that year. Most observers considered it a political ploy to attempt to tie then candidate Barack Obama to Islamic fundamentalism.

Clarion’s “security analyst” Ryan Mauro, who doubles as a Fox News contributor, made claims in 2013 on national news about Muslim “no-go zones” in Europe and the United States. His discredited claims later led to a foiled bomb attack on a Black Muslim community in upstate New York.

CVE/PVE wasn’t a good idea before it got co-opted by an anti-Muslim hate group. Now it’s worse.