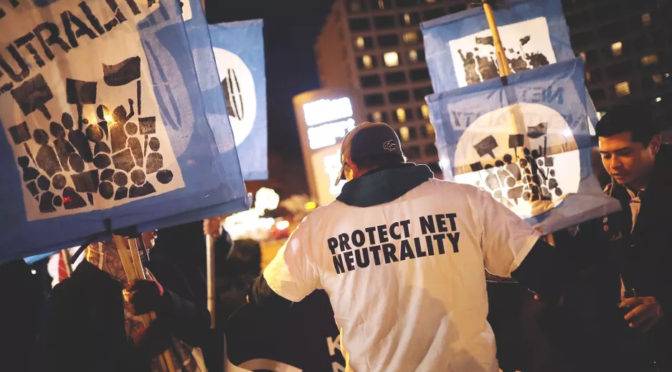 Despite protests online and in the streets, as well as appeals from Congress (including one Republican ), the FCC voted three-to-two this morning for Republican chairman Ajit Pai’s Restoring Internet Freedom order to scrap the net neutrality rules created under his Democratic predecessor, Tom Wheeler. But that won’t settle the issue. This being America, the next round will be duked out in a courtroom.

Recent experience shows how that may shake out. In 2015, the United States Telecom Association, an industry group including ISPs like AT&T and Verizon, sued the Democratic-majority FCC (and lost, in a 2016 ruling) to overturn its net neutrality regulations. Now activist groups and some companies are getting ready to sue Trump’s FCC over the abolition of those rules. “It will be the same this time except with the roles reversed to some extent,” says Matt Wood, policy director at Free Press, an organization that supports net neutrality regulations.

The United States Telecom case offers a good idea of the usual suspects who may sue the FCC over its plans to scrap net neutrality regulations. Twenty-four groups or companies joined the suit directly as “intervenors” on the government’s side. Many more people and organizations submitted a “friend of the court” (aka amicus curiae) letter in support of the previous FCC. That’s what the American Library Association and the Writers Guild of America say they will now do to oppose the FCC’s policy reversal. Other organizations that told me they are likely to jump into a lawsuit, although not saying how big a role they will play, include WordPress maker Automattic Inc., open-source software company Mozilla, and advocacy groups the Computer & Communications Industry Association, Engine Advocacy, the Electronic Frontier Foundation, and Public Knowledge.

“I think there will be a lot of lawsuits. There will be a lot of petitioners,” says Gigi Sohn, a fellow at the Georgetown Law Institute for Tech & Society. She served as counselor to Tom Wheeler when the bundle of net neutrality regulations, called the Open Internet Order, was created in 2014 and 2015. Before that, she was cofounder and CEO of Public Knowledge. “I don’t expect it’s going to be Google and Facebook [suing],” she says. “It’s likely to be small and medium-sized companies and other companies that have an online presence. And of course you get the nonprofit sector.”

Different parties may have their own attack plans. There are at least three courses they might take, and a suit could combine multiple strategies. One option is to directly challenge the FCC’s rationale that ISPs are too different from telecomm companies to be regulated under laws meant for phone services. (About 200 experts, including internet pioneers Vint Cerf and Tim Berners-Lee, wrote to the FCC saying that ISPs in fact are like phone companies.)

Lawsuits could also challenge how the FCC handled the process. Investigations, including by the New York attorney general, show that a million and possibly many more of the public comments that were submitted to the FCC were fake. Right after the FCC vote, New York attorney general Eric Schneiderman announced his own lawsuit. “We will be filing a claim to persevere protections for New Yorkers and all American and will be working aggressively to stop the FCC’s leadership from doing any further damage to the internet and our economy,” the AG said in a video statement.

While the fraudulent comments have remained in the record, possibly 50,000 citizen complaints about net neutrality violations have not been included in the FCC’s evaluation. Opponents might also accuse the FCC of being arbitrary and capricious in so quickly reversing the policy it had just finalized in 2015. “You can’t just say, ‘Nope, we’re changing it,’ and not have a justification for that change,” says Denelle Dixon, chief legal and business officer at Mozilla.

Plaintiffs may want to try their luck in different three-judge district courts of appeal (the U.S. has 13), say Rosenberg and Wood. But the cases will eventually get consolidated into one large suit, predicts Wood, possibly—in Groundhog Day fashion—with the D.C. Court of Appeals. That court has already decided three major net neutrality cases in the past eight years: suits by Comcast in 2010 and Verizon in 2014 striking down FCC net neutrality regulations and the 2016 suit upholding them. (Poor judge David S. Tatel has been stuck with hearing all three cases.)

THE LONG ROAD TO COURT

Don’t expect lawsuits to drop immediately after the vote, because technically there won’t yet be anything to sue over. After the FCC approves Pai’s order, a few days or even weeks of tweaking and refining will follow before the order is formally “released” by the commission. But the order still isn’t official until it’s published in the Federal Register. The 2015 net neutrality regulations, for instance, were approved on February 26 of 2015, released on March 12, and finally hit the Federal Register on April 13.

Opponents then have 10 days to consider if and how they will take legal action before the deadline to serve legal notice on the FCC. Some will sue outright or join a suit. Others may submit those friend of the court letters. “We are absolutely considering both,” says Dixon.

Plaintiffs will first have to convince a court that they have standing, that they have suffered a “concrete injury” by the FCC’s decision to end net neutrality regulations. “We have to insure that we as Mozilla can articulate that we are impacted,” says Dixon. “I think we are, and certainly our users are and our products are.”

But standing could be trickier than people expect, warns Tracy Rosenberg. Media Alliance has been active on behalf of journalist members for over 40 years. But the FCC recently challenged its standing in a suit against the rollback of media consolidation rules, like preventing a company from owning a television station and newspaper in the same market. “We just got a standing challenge,” says, Rosenberg “which is kinda silly, since we’ve sued the FCC five times, and no one ever questioned our standing. But Pai is an assertive entity.”

After suits are filed, it could take 6 months or longer before a trial begins and another six months or so before a decision comes down. So this fight will continue through 2018, possibly becoming an election issue. Congress oversees the FCC. It has the power—though maybe not the will—to settle the net neutrality debate, on way or another, with legislation. Activists are already hitting Congress hard with protests and petitions. “I’m hearing that [Capitol] Hill offices are getting more calls on [net neutrality] than the tax bill,” says Gigi Sohn.

The sound of Pai’s gavel falling on December 14 may imply that something definitive has happened. But it really signifies just the beginning of more tedious, messy battles in the years-long net neutrality war.