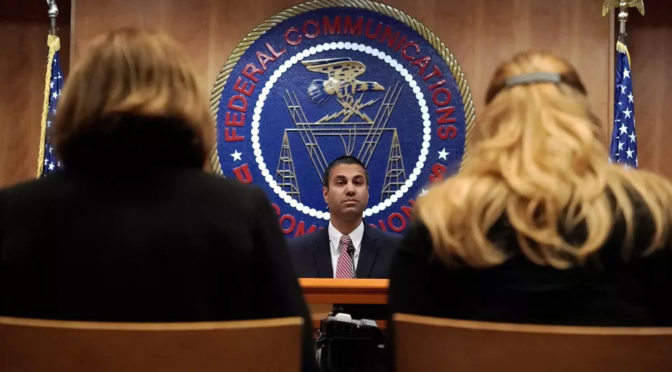 American net neutrality policy, a decade-old dumpster fire, flared up again this week with the FCC’s party-line vote approving chairman Ajit Pai’s Restoring Internet Freedom order. It scraps the FCC’s own 2015 regulations prohibiting internet service providers from blocking or throttling (slowing down) access to certain web sites and services or charging them extra money for “fast lanes” with better access. The vote was no surprise to the many activists, businesses, and state governments who have already been planning legal counterattacks. With 2018 being an election year, they will argue the case not only to judges but also to voters—pressuring both courts and Congress to take action.

Lawsuits probably won’t be filed until at least January, but it’s already clear that they will challenge the FCC’s vote on both substance and process. The substance argument is a legalistic, almost existential, debate over the true nature of an ISP, which I’ll describe in a bit.

The process arguments will charge that the FCC was sloppy and arrogant in how it implemented its plan. A seven-month investigation by the New York state attorney general has found that at least 10 million of the over 22 million comments submitted on Pai’s plan were bogus. Eight million came from fictitious people, such as “example@example.com” or “The Internet,” and two million were fraudulently submitted under the names of real people, including little children and the deceased.

“This comment was made under my mom’s name. She passed away several years ago from cancer. This is sickening.”
– Chicago, IL resident who checked the FCC site for fraudulent comments

The comments kerfuffle is just the biggest of several possible scandals, such as vague claims by the FCC that its site suffered a DDoS attack on May 8, the day after John Oliver extoled fans to send in pro-net neutrality comments. The Government Accountability Office is now investigating the FCC’s hacking story.

Meanwhile, Freedom of Information Act lawsuits from journalists and activists abound. They seek information on the fake comments, the possibly fake attack, and 50,000 poorly sorted net neutrality violation complaints that the FCC didn’t include when evaluating the new policy. “In all of my years of experience I’ve never seen anything like this,” says Harold Feld, senior VP at activist group Public Knowledge, who’s been in the field for about 20 years.

This hot mess has understandably grabbed the headlines and provoked the loudest political reaction, with the attorney general of New York and 17 other states (plus D.C.) and dozens of Congresspeople (even some Republicans) saying that the vote should have been postponed. But the scandals are a sideshow in a story that has gone on for years and shows no sign of ending. They might take away Pai’s new victory, but they won’t settle the war for either side.

WHICH OUTDATED LAW SHOULD APPLY TO AN ISP?

What’s kept the fire burning all these years is the fight over two lousy choices for how to legally classify an ISP. Is it a “telecommunications service,” like an analog telephone line, which just passes information along? Or is it an “information service,” which makes some modifications or enhancements to the data?

“Neither” may be the most accurate answer, but it’s not an option—unless Congress undertakes a hard-to-imagine bipartisan effort to update moldering telecom laws. (So far, only a likely partisan effort by Representative Marsha Blackburn seems to be afoot.) Otherwise, net neutrality will remain a debate over whether ISPs look more like Ma Bell from the 1980s or CompuServe from the 1990s.

That’s why ISPs freaked out in 2015 when the Democratic-lead FCC, under Chairman Tom Wheeler, voted to label them a telecommunications service. Recognizing the 1934 law as a bit of a kluge for 21st century tech, the FCC promised to “forbear” (not utilize) 27 provisions of Title II and over 700 FCC rules and regulations—including the ability to set rates. ISPs feared that the FCC would go back on its forbearance promise.

“The [FCC plan] displays a disturbing lack of knowledge.”
—Joint Comments of Internet Engineers, Pioneers, and Technologists to the FCC

This was in the era of AOL, CompuServe, and Prodigy, when an ISP was a world unto itself, with its own email service, bulletin board, chat rooms, and original content. Two decades later, those closed worlds have disappeared. ISPs have become more like telephone lines, connecting users to places all around the planet that have nothing to do with the ISP. The Washington, D.C. court of appeals agreed in June 2016, rejecting a lawsuit by ISPs and other tech companies against net neutrality rules.

Under new management, the FCC is reversing course and saying that ISPs still do something more special than passing data along. It’s reaching into some pretty obscure technologies to make that point. One of them is DNS: When you type “google.com,” for instance, a domain name server has to translate that to the numerical address 172.217.7.196 in order to reach Google’s servers.

Pai’s order spends the first 52 of its 210 pages on such arguments for why ISPs should be an “information service” and not a telecommunications service. “I give them credit. They were crossing all their Ts and dotting all their Is,” says Gigi Sohn, the cofounder and former CEO of Public Knowledge, who went on to serve as counselor to Tom Wheeler.

“#NetNeutrality allowed me to invent the web. If protections are scrapped, innovators will have to ask ISPs for permission to get their ideas out – a disaster for creativity. A disaster for the internet. Tell your Reps to stop the vote.”
— Tweet from Tim Berners-Lee

The latter, say the people who built the internet. About 200 tech experts, including World Wide Web inventor Tim Berners-Lee and TCP/IP co-creator Vint Cerf, sent a paper to the FCC calling BS on its argument that DNS, caching data, or other incidentals for establishing a connection count as special services to customers. A subheading in their report sums it up their opinion: “The [FCC plan] Displays a Disturbing Lack of Knowledge of How Data is Routed on the Internet (and in the Telephone Network).”

WAS THE FCC TOO COCKY?

It’s not a court’s job to judge how smart government bureaucrats are, however. “Critically, we do not ‘inquire as to whether the agency’s decision is wise as a policy matter; indeed, we are forbidden from substituting our judgment for that of the agency,’” wrote the D.C. appeals court in 2016. Instead, said the judges, its job is to determine if the government action was “arbitrary, capricious, an abuse of discretion, or otherwise not in accordance with law.”

That’s where opponents will go after the FCC, charging it made a sweeping change to internet policy without justifying why. “The [FCC] will have to, one, defend its methodology, and two, really prove to the court that either the previous commission mischaracterized what internet service providers do or the facts have materially changed,” says Dave Schaeffer, founder and CEO of internet backbone provider Cogent Communications. “I think both of those will be very hard to accomplish.” (Cogent joined the 2015-2016 lawsuit to defend the FCC’s net neutrality rules.)

Opponents will argue that the 2015 net neutrality rules evolved from over a decade of bipartisan policymaking, whereas their undoing was at the whim of an ideologue chairman. Lawsuits may cite things like a 2004 speech by Republican FCC chairman Michael Powell introducing four “Internet Freedoms,” that basically say people should be able to access any legal content on any device, and ISPs should clearly explain how their plans work.

His Republican successor Kevin Martin rolled those freedoms into a slightly meatier “policy statement” in 2005. And in 2010, Democrats under chairman Julius Genachowski expanded the ideas into the first Open Internet Order, which established rules against blocking or “unreasonable discrimination.”

“What Pai is doing, saying the FCC has absolutely no authority over broadband…goes against the last 20 years of bipartisan understanding and action by the FCC,” says Gigi Sohn. “Not Michael Powel, not Kevin Martin, not anybody believed the FCC should not have a role.”

But there were always partisan differences. Genachowski’s plan was only passed by a 3:2 party-line vote. The same was true for Wheeler’s 2015 plan. And Powell, who kicked things off with the four internet freedoms, supports Pai’s rollback. “The vibrant and open internet that Americans cherish isn’t going anywhere,” Powell wrote in an op-ed on Recode. He always said that ISPs should voluntarily uphold internet freedoms, because it’s good for business. And if they didn’t, it was up to consumers to take action by dumping their ISPs. (Easier said than done, though, for the millions of Americans who have only one ISP option.)

Genachowski’s plan was shot down in a legal case brought by Comcast in 2010; and an attempt to fix it was shot down by a Verizon lawsuit in 2014. The D.C. court of appeals was sympathetic to the FCC’s warnings about ISPs and net neutrality. But the mushy “information service” label didn’t provide the legal authority to impose the FCC’s rules, said the judges. Only after being told this twice did the FCC finally go ahead and re-label ISPs as a “telecommunications service” in 2015.

Having spent years establishing that ISPs are like telephone companies, the FCC is suddenly reversing course, the lawsuits will claim.

Lawyers will be mining Pai’s own statements, which sometimes have a Trumpian bravura, to portray him as arbitrary and capricious. Exhibit A could be a speech he gave way back in April saying that overturning net neutrality rules was a “fight that we are going to win.” This was before he’d seen any of the public comments (real or bogus), which the FCC is required by law to look at before finalizing its plan. “It doesn’t seem like anything has changed his intention based on the public input that has come in,” says Denelle Dixon, chief legal and business officer at Mozilla, which may also end up suing.

Pai is more likely to get tripped up by the fake comments scandal and some flippant comments he’s made about it, like a press release calling the New York attorney general’s investigation “nothing more than a transparent attempt by a partisan supporter of the Obama administration’s heavy-handed internet regulations to gain publicity for himself.” New York announced right after the vote that it would spearhead a multi-state lawsuit against the FCC. And several other states, like Illinois, Iowa, Oregon, and Washington, are joining in.

That brings us full-circle back to the fight over process, not substance. There’s a chance that Pai’s current plan to dismantle the regulations will flame out in scandal, but that won’t quench the bigger ideological fire of net neutrality.